Legends and Bridge is “Feud” meets “End of the Rainbow.”

It’s the imagined story of Joan Crawford inviting Bette Davis and Judy Garland to live with her to work on their comeback film. They agree all eager beaver until they see what project she has in mind. Toss in Tennessee Williams and a YOUNG boy toy and you got a card game filled with Hollywood backstabbing! 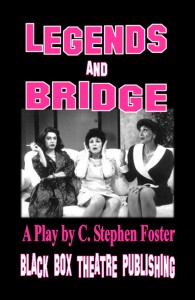 “OUTRAGEOUS! One of the bitchiest cat fights this side of Dynasty. Campy farce exploring the fine art of Hollywood backstabbing! ” LA WEEKLY

2 Responses to Legends and Bridge