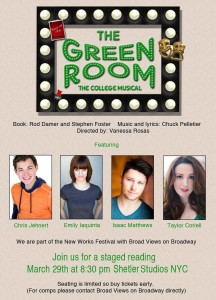 we are so pleased to announce that we have 2 projects in NYC coming up: “Green Room” is having a staged reading on March 29th and “Legends and Bridge” is being PRODUCED in October!  Hope you can make it to one or BOTH!
Stephen
The Green Room: the College Musical”
Music and lyrics: Chuck Pelletier
Book: Rod Damer and Stephen Foster
We are part of the New Works Festival with Broad Views on Broadway
Join on March 29th at 8:30 for a staged reading!
Seating is limited so buy tickets early.
For INDUSTRY comps please contact broadviewsonbroadway@gmail.comOur DIVINE cast is:
Divonne: Emily Iaquinta
Anna: Taylor Coriell
John: Isaac Matthews
Cliff: Chris Jehnert
Directed by Vanessa Rosas
Rights to produce Green Room available at Steele Spring Stage Rights
AND
Stephen’s hit COMEDY Legends and Bridge opens IN NYC Friday, October 10th 2014 at The Producer’s Club’s newly renovated ROYAL THEATER on 44th Street!!!! TICKETS ON SALE!

C. Stephen Foster is an award-winning actor/writer originally from Ft. Worth, Texas currently living in Hollywood. He won best supporting actor awards for his role in the comedy short "That's Opportunity Knocking". He wrote the self-help workbook "Awakening the Actor Within" His two-man show (with Scott Wilkerson), "Divanalysis: the Mechanics of Camp", played as part of the summer series at the renowned Highway's Performance Art Space. Foster penned (and starred in) the comedy "Legends and Bridge" which was extended three times at the Group Repertory Theater. "Legends" received rave reviews including Critic's Pick in The Valley Scene, Spotlight in Backstage West, and was "Recommended" by the LA Weekly. It garnered three ADA Award nominations including Best Comedy and Best Play. Foster co-wrote several screenplays which was a finalist in several major contests. As a stand-up comedian he's played the Comedy Store, Improv and Laugh Factory. Stephen co-wrote the book to the hit musical "The Green Room: the College Musical" (licensed by Steele Spring Theatrical Licensing.) He is the lead in the in the independent movie "Off Hollywood". And featured in "Hidden Hills" "Expect Delays" & "Making Olivia".
View all posts by cstephenfoster →
This entry was posted in About Me, Scripts and tagged C. Stephen Foster, green room, Legends and Bridge, news. Bookmark the permalink.