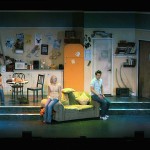 “A bright, beaming cherub of a fledgling musical. Composer-lyricist Chuck Pelletier’s skillfully crafted score is a satisfying range of musical styles. Think Merrily We Roll Along–without the rolling. The combination of youth and ambition in these characters conspires to make narcissism the show’s dominant theme, celebrated with breezy wit and irony.” –Los Angeles Times

“From the first note of this fresh new musical, you’d better pay attention because the words fly fast and furious, with energy to spare, from the sparkling young cast. If you’ve ever been an actor, wanted to be an actor or known an actor, you’ll relate to the Broadway-hopeful dreams of these characters in their home away from home–the green room. Pelletier’s music satisfies the audience by moving through a number of styles. Together, the elements work to create a thoroughly enjoyable evening.” –Musicals in LA

“5 STARS. Critics Pick! Boasts a uniquely appealing musical score by Chuck Pelletier and a fast-paced, optimistic story about collegiate youth. It’s All About Me, Destination Stage Left, I Wanna Go to Extremes and Nothing Can Stop My Boys are just four of the tuneful songs that will stay with you for many years to come. From what other new contemporary musical are you likely to even remember one tune?” –Grigware Talks Theatre

“The production of the musical at California Stage is a surprisingly sweet (and sometimes bawdy) tale of ambition and talent.” –Sacramento Bee

“This little musical will no doubt become a favorite among the musical theater community, if for no reason other than how well it mirrors the experience of so many young actors. The pop-based score has some outrageously funny (and smart) lyrics, notably an anthem to virility (Nothing Can Stop My Boys) and an extremely snarky riff on the politics of theater (Destination Stage Left). For those of us who spent any time around the theater crowd in college, The Green Room is a trip down memory lane.” –Sacramento News & Review

“Striking, evocative and theatrical pastiche.  It has great energy and the four performers bring that energy and expectancy to the stage.  Funny lines…Fun double entendres!  You want to whistle and cheer. The show cleverly ends with a cracking song, Waiting in the Wings.” Munster Express (Waterford, Ireland)

“Heartfelt, comedic musical received standing ovations. The musical arrangements were classy and full of invention. The manner in which dialogue, movement and songs segue into each other is a delight in the show. The songs are never mere add-ons but integral to the workings of the script. This is a splendid production with four top class performances from a young and talented cast who all gave larger than life performances as everyone entered with a Thespian flourish” Waterford News & Star

C. Stephen Foster is an award-winning actor/writer originally from Ft. Worth, Texas currently living in Hollywood. He won best supporting actor awards for his role in the comedy short "That's Opportunity Knocking". He wrote the self-help workbook "Awakening the Actor Within" His two-man show (with Scott Wilkerson), "Divanalysis: the Mechanics of Camp", played as part of the summer series at the renowned Highway's Performance Art Space. Foster penned (and starred in) the comedy "Legends and Bridge" which was extended three times at the Group Repertory Theater. "Legends" received rave reviews including Critic's Pick in The Valley Scene, Spotlight in Backstage West, and was "Recommended" by the LA Weekly. It garnered three ADA Award nominations including Best Comedy and Best Play. Foster co-wrote several screenplays which was a finalist in several major contests. As a stand-up comedian he's played the Comedy Store, Improv and Laugh Factory. Stephen co-wrote the book to the hit musical "The Green Room: the College Musical" (licensed by Steele Spring Theatrical Licensing.) He is the lead in the in the independent movie "Off Hollywood". And featured in "Hidden Hills" "Expect Delays" & "Making Olivia".
View all posts by cstephenfoster →
This entry was posted in Play Reviews, Scripts and tagged drama, green room, musical, review, theater, theatre. Bookmark the permalink.